Today we live longer but, unfortunately, our increased age is linked to an increased risk of neurodegeneration and the onset of diseases such as Alzheimer’s and Parkinson’s. Although Alzheimer’s and Parkinson’s disease were both clinically diagnosed over 95 years ago, these devastating diseases are still not fully understood. Treatments are mainly prophylactic and strategies to prevent their occurrence or stop their progression are completely lacking.

Alzheimer’s and Parkinson’s disease are so-called amyloid diseases, and are associated with the misfolding of specific proteins. The structural differences of participating prionoid proteins that result, allow these proteins to form insoluble, highly organized aggregates termed amyloid fibrils. A structural understanding of the oligomeric protein species involved in the aggregation and the transmission of the disease from one cell to the other in the brain, is urgently required.

Our aim: To understand neurodegeneration on a structural level, and to determine the structure of the key protein species at atomic resolution.

Our focus: The use of high-resolution electrom microscopy, nanodiffraction and visual proteomics to define the aggregation pathway that causes neurodegentration, to understand cell-to-cell spreading, and to structurally characterize the key protein aggregates at atomic resolution.

The Structure of Alpha-Synuclein Fibrils 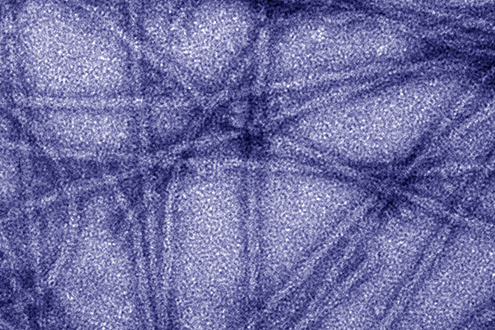 The Structure of LRRK2